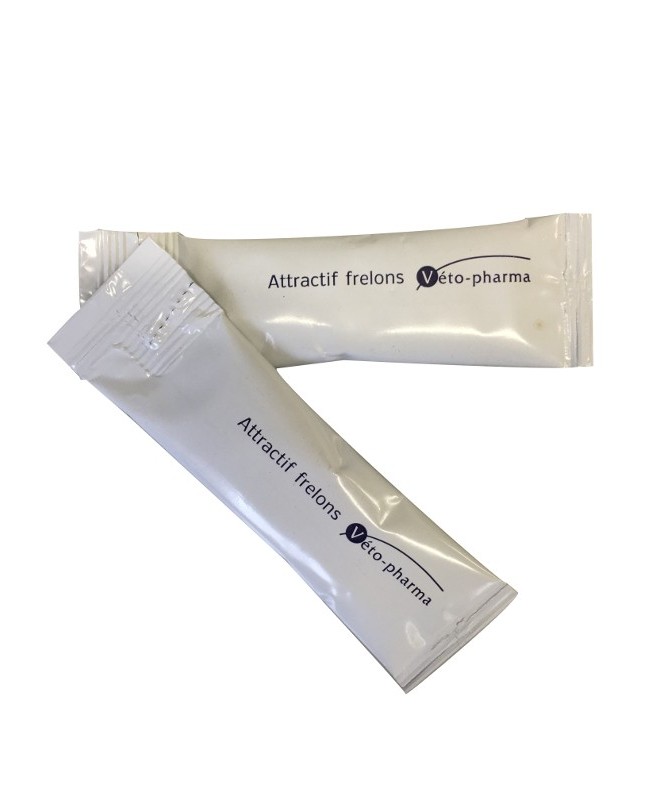 This product is no longer in stock

The stick is sufficient for two traps.

Performing the trapping to contain the expansion of the Vespa velutin is very important, here is an excerpt from the University of Turin-Disafa.

the ASIAN CALABRON (VESPA VELUTINA): MONITORING AND TREATMENT - A CARE OF UNIVERSITY OF THE STUDIES OF TURIN - DISAFA

Research and monitoring The arrival of the Asian hornet Vespa velutina in Italy requires the prompt adoption of a series of measures that allow the timely reporting of its presence, in this way it will be possible to identify and destroy the first outbreaks, in order to stop, or at least slow down, the spread of this new scourge in our country. The presence of the Asian hornet can be easily observed in apiaries while it flies in front of the doors to capture the foragers; alternatively, simple bottle traps can be installed in the vicinity of the hives.

To this end, transparent, non-coloured plastic bottles with TapTrap® caps can be used effectively, which have provided good results in the monitoring stations activated in previous years in Liguria and Piedmont. The cap is relatively inexpensive and long-lasting; the attachment/unclamping of the bottles takes just a few seconds and the whole operation takes place quickly; the bottles are recycled. The traps can be placed in different environments without limitations, hanging them from branches of trees and shrubs, or from specially made hooks, at a height of 1.50-1.80 m above the ground (Figures 1 and 2). In apiaries, taking into account the hunting behaviour of bumblebees, it may be advisable to place the traps on the sides of the rows of hives, about 20-50 cm from the wall of the hive and at a height no higher than the level of the roof; if abnormal catches of bees are observed, they should be spaced further apart. Bottles should be emptied periodically, weekly or at most fortnightly, possibly always on the same day of the week. This sampling rate is necessary in order to reconstruct, a posteriori, the trend of the presence of the hornet in the different environments. The contents of the bottle can be poured into a sieve to recover all the captured insects; these must then be placed in a container (those made of transparent polystyrene for food of 15 x 20 x 3 cm with lid are very suitable), arranged on a sheet of absorbent paper (Figure 3). Containers should be stored in a freezer until they are sent to the laboratory for content analysis. In order to allow those checking the material to have the necessary data, it is necessary to note on the lid or on the sheet of paper inserted in the container the following indications: location, date of placement and emptying, climatic trend of the period. For each station it is necessary to collect general information regarding: geographical coordinates, altitude above sea level, type of environment within a radius of 1 km, indication of the nearest weather stations from which data can be obtained. The finding, even if only suspected, of V. velutina, especially in places other than those already known, must be immediately reported to the local beekeeping associations and the Observatory of Beekeeping "Don Giacomo Angeleri" of the University of Turin (www.vespavelutina.unito.it), to provide an updated picture of the situation in Italy and to try to eradicate new outbreaks. The purpose of the monitoring is to know how V. velutina is spreading throughout the country, this information should not be an end in itself, but must be used primarily to intervene promptly and destroy the colonies before they raise new queens. The observation of the direction of flight of the Hornets can be used to try to locate the nests, but in difficult and wooded environments this result is very difficult to achieve without the help of appropriate electronic equipment. The monitoring stations also allow to know which other species are present (other wasps, bees, other wild bees, diptera, lepidoptera, etc..) and to assess the impact on the environment of this collection. Mass capture As far as mass capture (trapping) is concerned, no solution has yet been found. The numerous attempts to counter V. velutina in France have not prevented it from spreading over more than 75% of the territory. It is necessary not to be taken by emotion and to follow the idea that the last advice received from the friend / acquaintance on the type of trap and / or attraction may be the solution. The really important aspect is the rigorous verification of the captured insects (period of presence, quantity, ... ) and the communication of the results to those who work to have a global view of the phenomenon. In our environments, where the Asian hornet has just arrived, the spring trap in the areas of first introduction could prove useful to capture the founders who leave the winter shelters to found the primary nests, in order to try to reduce the expansion in the territory. The French, on the other hand, advise against this activity in areas where the insect has now stabilized, because they believe that the competition between queens for resources and nesting sites is a cause of stress with consequent mortality, to such an extent as to be more effective than the trap itself.